Observatory on European Studies _ The Association Agreement between the European Union and Mercosur and the environment: political and legal obstacles on the way forward 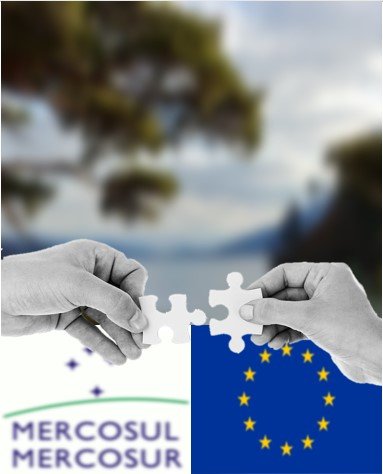 The negotiations on the Association Agreement between the European Union (EU) and Mercosur (hereinafter, the āAgreementā) encompass three pillars: political dialogue, cooperation and trade. In June 2019, the two blocs reached an āagreement in principleā on the trade pillar, after 20 years of negotiations. In June 2020, negotiations on the political and cooperation chapter were concluded. Despite this, the conclusion of the Agreement seems far from completion, since the text still needs to be finalised, signed and, finally, ratified in order to enter into force. As it is a āmixedā agreement (its content falls within competences shared between the Member States and the European Union, and therefore is concluded between EU countries and the bloc as a whole), it must be ratified not only by the European Parliament, but also by each of the countries of the EU. It is a process that involves political and legal hurdles in domestic, European and international law.

The negotiations and advancement of the Agreement seem stalled not only, but partly due to criticisms regarding environmental issues surrounding it. Against this backdrop, this post provides an overview of the prospects of the Agreement between the EU and Mercosur, with an emphasis on the current Brazilian administrationās environmental policy and its relationship with the advancement of the negotiations. Indeed, climate change and sustainability have become a central element to the EU and its member Statesā external relations. However, the European environmental agenda seems to conflict with the Bolsonaro administrationās agenda. Against this backdrop, this post raises some of the political and legal barriers generated by this impasse. To date, the āagreement in principleā on trade between EU-Mercosur is the only part of the Association Agreement publicly available, and the considerations here advanced are based on this part.

Recently, as a part of its broader foreign policy, the EU has fostered the debate on and inclusion of chapters dedicated to environmental concerns in the negotiation of its trade agreements. In this context, the EU-Mercosur Agreement has represented, for the European bloc and for some EU countries, a way of advancing the broader environmental agenda pursued by the EU. Indeed, the agreement in principle on trade between EU and Mercosur contains a chapter exclusively devoted to trade and sustainable development.Ā  Other recent agreements concluded by the UE make reference to the relevance of sustainable development in their preamble and/or contain a chapter on sustainable development and trade (see e.g. EU Association Agreements with Moldova and Georgia; Free Trade Agreement with the Republic of Korea; EU-Japan Economic Partnership Agreement).

On December 14, 2020, representatives of the EU and ministers from Argentina, Brazil, Paraguay and Uruguay discussed in an informal meeting the procedures to advance the ratification and entry into force of the agreement between the two economic blocs. According to a public note issued by the EU, the representatives of both blocs āexpressed their conviction that the Agreement should be implemented in such a way so as to provide benefits to both sides in the economic, social and environmental dimensions of sustainable developmentā and āreiterated their commitment to effectively implement the international commitments set out in the Agreement, including the Paris Agreementā. They also āexpressed their conviction that their cooperation to establish the right conditions for the entry into force of the Agreement will enhance its potential to contribute to the shared overarching objective of sustainable developmentā (see full note here). In summary, out of the four paragraphs in this brief note, the importance of environmental development to the advancement of the negotiations was highlighted in three of these. The emphasis placed on the Paris Agreement and international environmental commitments leads to the conclusion that the process of ratification of the Association Agreement by the EU and Member States heavily depends on the pursuit of measures against climate change and pro-environment by the parties to the Association Agreement.

Part of a governmentās environmental policy is expressed in the rhetoric used in its foreign relations, especially given the recognised transboundary, global reach of climate change. Yet, the Bolsonaro administration has shown signs that environmental concerns and the fight against global warming are far from being a priority on the Brazilian agenda. In a speech given at the opening of the UN General Assembly in 2019, Bolsonaro said it was āa fallacy to say that the Amazon is the heritage of humanityā, and indicated that a ānew indigenous policyā should seek economic development. At the same event, in 2020, Bolsonaro played down the impact of fires in the Amazon region and claimed that ā[f]ire outbreaks tend to occur virtually at the same places, in the eastern surroundings of the forest, where Brazilians of indigenous ancestry burn their farmlands in search of livelihood in already cleared areasā. The current Minister of Foreign Affairs, Ernesto AraĆŗjo, has also adopted a rhetoric that treats environmental issues as unimportant.

From a political point of view, the advancement of the Agreement has been impacted by two types of criticism in what concerns environmental aspects. First, the Agreement itself has been widely criticised with respect to its potential negative impact on the environment, as some studies claim that the creation of the EU-Mercosur mega-bloc will have a negative impact on the environment. As a result, NGOs, civil society and even some EU member States have opposed to the agreement in its current form. France represents one of the most prominent sources of opposition to the Agreement. After the negotiation of the trade agreement between the two blocs in 2019, the French government commissioned a report prepared by a group of experts to analyse the environmental impact of the trade agreement. The report, led by economist Stefan Ambec, concluded that the implementation of the agreementās trade measures would cause strong negative impacts on the environment. In view of this report, the French Prime Minister declared that the report āconfirms Franceās position to oppose the draft EU-Mercosur agreement as it standsā.

The second political obstacle to the advancement of the Agreement is that a trade bloc between the EU and its Member States with Brazil (in the context of Mercosur) has Ā also been heavily criticised due to the international perception of Bolsonaroās environmental policy. The European environmentalist agenda (or rhetoric) is incompatible with the conclusion of a trade agreement between the EU and Mercosur, whose largest economy is Brazil, if the latter adopts such a dismissive approach to environmental concerns as briefly described above. The criticisms against the conclusion of a trade agreement with Brazil in these circumstances occur both in European and domestic levels. As indicated by the European Parliamentary Research Center, āEU-Mercosur deal ratification has become more uncertain in 2020, as the Brazilian government has proved resilient against criticism, EU citizens polled have been predominantly opposed, and Parliaments in Austria, Belgium, Ireland and the Netherlands have voted against. In France a vote is pendingā (p. 2). The objections of the EU and some of its Member States to the advancement of the EU-Mercosur Agreement are largely based on Brazilian practices with regard to the environment. Bolsonaro administrationās feeble environmental policies and intention to implement the Paris Agreement are at the center of this second realm of political difficulties.

Ā In addition to these political factors, there are also potential legal barriers that may ensue from the clash between the Agreementās objectives and the Brazilian current environmental policy. At first sight, the EU-Mercosur Agreement does not impose environmental obligations on the parties, at least in its publicly available version. The trade pillar of the Agreement contains a chapter on trade and sustainable development, which calls for the observance and implementation of other international agreements signed by the parties, but it is drafted in āsoftā language and, as long as the Agreement is not signed, the partiesā legal obligations are limited.

Nevertheless, treaty law indicates that the moment of signing an international treaty marks the acceptance of a formal bond. In the event that the EU-Mercosur Agreement is signed by the European bloc, the period between the signature and ratification by the Member States is marked by the customary āObligation not to frustrate the object and purpose of a treaty before its entry into forceā, codified by Article 18 of the Vienna Convention on the Law of Treaties. Thus, from the moment of signature, three pertinent questions arise. Firstly, it should be determined what the āobject and purposeā of the EU-Mercosur Agreement is. Second, if Brazil, through its current environmental policy, would be frustrating such an object and purpose. Third, once it has been determined whether Brazil is frustrating the object and purpose of the Agreement, one can ask what the consequences of this violation are.

These questions can only be answered with greater accuracy from the consolidated and duly publicised text of the EU-Mercosur Association Agreement, when it comes to be. Still, it is in the interest of the Brazilian government to demonstrate its engagement in pursuing and implementing environmental policies and international obligations if it wants to advance negotiations and the ratification of the Agreement, both for political possibly for legal purposes.

PhD in International Law at the University of Milan-Bicocca

Previously, she was visiting researcher at the Max Planck Institute Luxembourg, University of Geneva and WTO PhD Support ProgramĀ